This January saw the passing of a remarkable Ravenshead Theatre Group leader.

Betty Kirk’s contribution to our theatre group over a period of more than 30 years can only be described as immense.  It is no accident that our annual acting performance trophy, instigated in 2008 is called The Betty Kirk Award to honour her outstanding contribution.

Betty’s track record speaks for itself. Since joining RTG in 1980, she directed an amazing 26 productions – more than any other person in the group’s 46 year history. 16 of those
productions were January pantomimes, notoriously hard work for any Director. In fact, Betty Kirk directed every Ravenshead pantomime between 1990 and 2004.  A staggering achievement.

Beyond the traditional pantomimes, her 26 productions included ‘Katherine Howard’, two productions of the wartime drama, ‘And A Nightingale Sang’ and two productions of her own work, ‘Sweet Mary – Song of Newstead’. Inspired by a statue in Newstead Abbey, Betty imagined what historic events that statue would have witnessed across the years.
She created in ‘Sweet Mary’ a lasting and unique blend of local history and song that spanned 7 centuries.

Betty was a true RTG enthusiast. Our archives show that she often took on such backstage duties as prompt and assistant stage manager and let us not forget that she was a fine actress too. Her favourite role was The Mother in our 1990 production of ‘The Anniversary’ and she played Gwenda in Sue Townsend’s ‘Bazaar & Rummage’. Betty’s last appearance on the Ravenshead stage was in ‘Time, Murderer, Please’ in 2007. In latter
years, Betty continued to be one of our strongest supporters. A frequent face in the audience.

But Betty’s greatest strength was in Directing – especially traditional pantomimes. She became known in the Ravenshead area as “the lady who produces the pantos”. In the Director’s chair Betty could be strict and, at times, demanding, but she always remained true to her aim, which was to unlock the special ‘magic’ that only a live performance can bring.  This was her aim and she hit the target prolifically.

Betty cleverly adapted theatrical effects that she had seen in professional theatres and made them work within the restrictions of our Village Hall stage. Betty introduced innovative UV sequences and even puppetry into her pantomimes.  Characters bounced onstage from a small trampoline or slid into view down a child’s slide. Betty loved to surprise the audience and push the boundaries.

As our photograph from ‘Little Red Riding Hood’ shows, Betty loved to fill the stage with smiling faces and colourful costumes.  Many of our current members, young and old, made their performance debuts in the chorus of a Betty Kirk production.  Betty was also a talented artist. She would often refer to “her vision” of how the scene should look and had definite ideas about costume design, make-up, lighting and the set. Whilst others had
their working week, Betty was often to be found on the Village Hall stage painting the scenery.

Outside of RTG activities, Betty had many interests. She loved local and ancient history and gave expert talks on Egyptian archaeology.  She was also involved with Byron Ladies Probus and a member of Newstead Abbey’s ‘Monk’s Club’. Betty led a very active life.

The word ‘legend’ is often overused these days, but to Ravenshead Theatre Group, Betty Kirk was indeed a legend.  Those who knew her and worked with her to produce that “little bit of theatrical magic” will never forget her. 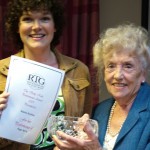 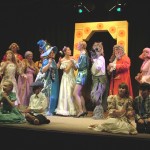